I Have a Rendezvous With Death 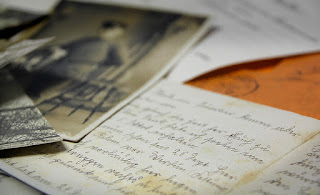 It may be he shall take my hand
And lead me into his dark land
And close my eyes and quench my breath —
It may be I shall pass him still.
I have a rendezvous with Death
On some scarred slope of battered hill,
When Spring comes round again this year
And the first meadow-flowers appear.

God knows 'twere better to be deep
Pillowed in silk and scented down,
Where Love throbs out in blissful sleep,
Pulse nigh to pulse, and breath to breath,
Where hushed awakenings are dear . . .
But I've a rendezvous with Death
At midnight in some flaming town,
When Spring trips north again this year,
And I to my pledged word am true,
I shall not fail that rendezvous.
Posted by Robert M. Gonzalez, Jr. at 7:00 AM No comments: Links to this post

Harp Song of the Dane Women 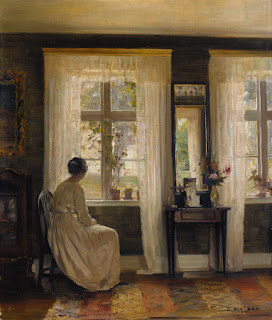 What is a woman that you forsake her,
And the hearth-fire and the home-acre,
To go with the old grey Widow-maker?

She has no house to lay a guest in—
But one chill bed for all to rest in,
That the pale suns and the stray bergs nest in.

She has no strong white arms to fold you,
But the ten-times-fingering weed to hold you—
Out on the rocks where the tide has rolled you.

Yet, when the signs of summer thicken,
And the ice breaks, and the birch-buds quicken,
Yearly you turn from our side, and sicken—

Sicken again for the shouts and the slaughters.
You steal away to the lapping waters,
And look at your ship in her winter-quarters.

You forget our mirth, and talk at the tables,
The kine in the shed and the horse in the stables—
To pitch her sides and go over her cables.

Then you drive out where the storm-clouds swallow,
And the sound of your oar-blades, falling hollow,
Is all we have left through the months to follow.

Ah, what is Woman that you forsake her,
And the hearth-fire and the home-acre,
To go with the old grey Widow-maker ?


Illustration: Waiting by the Window by Carl Holsoe (12 March 1863 – 7 November 1935), a Danish artist who primarily painted interiors.
Posted by Robert M. Gonzalez, Jr. at 7:00 AM No comments: Links to this post

Ode, Composed On A May Morning 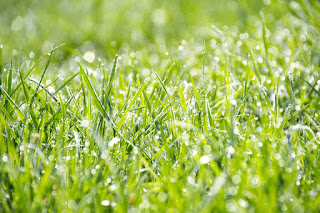 While from the purpling east departs
The star that led the dawn,
Blithe Flora from her couch upstarts,
For May is on the lawn.
A quickening hope, a freshening glee,
Foreran the expected Power,
Whose first-drawn breath, from bush and tree,
Shakes off that pearly shower.

All Nature welcomes Her whose sway
Tempers the year's extremes;
Who scattereth lustres o'er noon-day,
Like morning's dewy gleams;
While mellow warble, sprightly trill,
The tremulous heart excite;
And hums the balmy air to still
The balance of delight.

Time was, blest Power! when youth and maids
At peep of dawn would rise,
And wander forth, in forest glades
Thy birth to solemnize.
Though mute the song---to grace the rite
Untouched the hawthorn bough,
Thy Spirit triumphs o'er the slight;
Man changes, but not Thou!

Thy feathered Lieges bill and wings
In love's disport employ;
Warmed by thy influence, creeping things
Awake to silent joy:
Queen art thou still for each gay plant
Where the slim wild deer roves;
And served in depths where fishes haunt
Their own mysterious groves.

Cloud-piercing peak, and trackless heath,
Instinctive homage pay;
Nor wants the dim-lit cave a wreath
To honor thee, sweet May!
Where cities fanned by thy brisk airs
Behold a smokeless sky,
Their puniest flower-pot-nursling dares
To open a bright eye.

And if, on this thy natal morn,
The pole, from which thy name
Hath not departed, stands forlorn
Of song and dance and game;
Still from the village-green a vow
Aspires to thee addrest,
Wherever peace is on the brow,
Or love within the breast.

Yes! where Love nestles thou canst teach
The soul to love the more;
Hearts also shall thy lessons reach
That never loved before.
Stript is the haughty one of pride,
The bashful freed from fear,
While rising, like the ocean-tide,
In flow the joyous year.

Hush, feeble lyre! weak words refuse
The service to prolong!
To yon exulting thrush the Muse
Entrusts the imperfect song;
His voice shall chant, in accents clear,
Throughout the live-long day,
Till the first silver star appear,
The sovereignty of May. 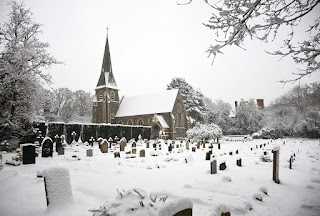 These hearts were woven of human joys and cares,
Washed marvellously with sorrow, swift to mirth.
The years had given them kindness.  Dawn was theirs,
And sunset, and the colours of the earth.

These had seen movement, and heard music; known
Slumber and waking; loved; gone proudly friended;
Felt the quick stir of wonder; sat alone;
Touched flowers and furs, and cheeks.  All this is ended.

There are waters blown by changing winds to laughter
And lit by the rich skies, all day.  And after,
Frost, with a gesture, stays the waves that dance
And wandering loveliness.  He leaves a white
Unbroken glory, a gathered radiance,
A width, a shining peace, under the night. 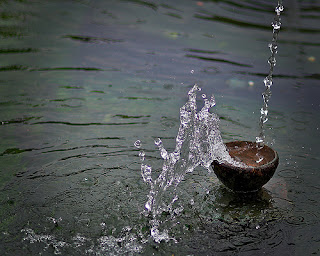 For Mercy, Courage, Kindness, Mirth,
There is no measure upon earth;
Nay, they wither, root and stem,
If an end be set to them.

Overbrim and overflow
If your own heart you would know.
For the spirit, born to bless,
Lives but in its own excess.

A Rhapsode’s Random Rhapsody for May 2020 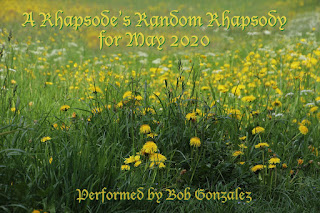 Posted by Robert M. Gonzalez, Jr. at 12:39 PM No comments: Links to this post 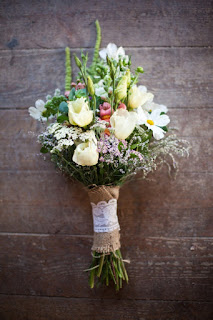 
"The Lizard" by Edwin Markham, performed by Bob Gonzalez

"The Star" by Sara Teasdale, performed by Mary Grace Epps

"The Cultured Constable" by C.J. Dennis, performed by Denis Daly

"To a Poet" by Carolyn Wells, performed by Jennifer Fournier

"The New Colossus" by Emma Lazarus, performed by Elaine Lazar

"A Boat Beneath the Sunny Sky," by Lewis Carroll, performed by P.J. Morgan

"In a Vale" by Robert Frost, performed by Shannon Guinn

"The Doubter's Prayer" by Anne Bronte, performed by Amanda Friday

"The Good Morrow" by John Donne, performed by Alan Weyman

"When I Heard the Learn'd Astronomer" by Walt Whitman, performed by Alexander Kulcsar

"A Child Said, What Is the Grass?" by Walt Whitman, performed by Ruth Anne Baumgartner

"I Felt a Funeral, in my Brain" by Emily Dickinson, performed by Sophia Williar 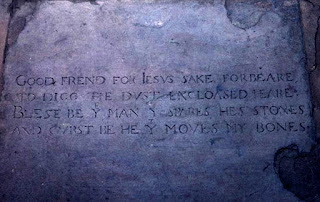 Fear no more the heat o' the sun,
Nor the furious winter's rages;
Thou thy worldly task hast done,
Home art gone, and ta'en thy wages:
Golden lads and girls all must,
As chimney-sweepers, come to dust.

Fear no more the frown o' the great;
Thou art past the tyrant's stroke;
Care no more to clothe and eat;
To thee the reed is as the oak:
The sceptre, learning, physic, must
All follow this, and come to dust.

Fear no more the lightning flash,
Nor the all-dreaded thunder-stone;
Fear not slander, censure rash;
Thou hast finish'd joy and moan:
All lovers young, all lovers must
Consign to thee, and come to dust. 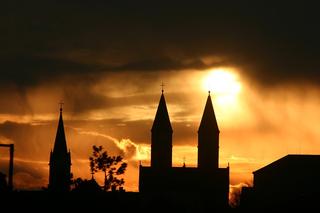 The east is yellow as a daffodil.
Three steeples—three stark swarthy arms—are thrust
Up from the town. The gnarlèd poplars thrill
Down the long street in some keen salty gust—
Straight from the sea and all the sailing ships—
Turn white, black, white again, with noises sweet
And swift. Back to the night the last star slips.
High up the air is motionless, a sheet
Of light. The east grows yellower apace,
And trembles: then, once more, and suddenly,
The salt wind blows, and in that moment’s space
Flame roofs, and poplar-tops, and steeples three;


From out the mist that wraps the river-ways,
The little boats, like torches, start ablaze.

* I recorded this poem and posted it on March 11, 2016. Without realizing it, I recorded it again recently and am now posting this version. If you compare the two versions, there are some subtle but interesting differences. In any case, you might have missed the first version and might enjoy this other one. And good poems are worth repeating.
Posted by Robert M. Gonzalez, Jr. at 12:09 PM No comments: Links to this post 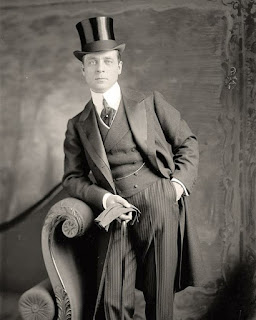 
Whenever Richard Cory went down town,
We people on the pavement looked at him:
He was a gentleman from sole to crown,
Clean favored, and imperially slim.

And he was rich, — yes, richer than a king, —
And admirably schooled in every grace:
In fine, we thought that he was everything
To make us wish that we were in his place.

So on we worked, and waited for the light,
And went without the meat, and cursed the bread;
And Richard Cory, one calm summer night,


Went home and put a bullet through his head.

Posted by Robert M. Gonzalez, Jr. at 6:00 AM No comments: Links to this post